I’ve been told that the only things in this world which are certain are Death and Taxes. Apparently there is a way to postpone at least one of them.

When talking to a client the other day, she was telling me how she had contacted the IRS to pay some back taxes that were owed. She wanted to set up a payment plan as the amount owed had warranted such an arrangement. What she told me left me stunned.

She said “The very nice man told me he’d set up my file, mail me an application and I need to send it back within 30 days. At that time I’d be assigned an agent to my file who would, 30 days later approve the case – even though I was told it was basically already approved as of the phone call. And at the end of this period – now 60 days – the scheduled payments would begin.” When I asked “But that’s 90 days from now.” The nice man just said “Yes, that’s right.”

She was ready to give them the money right then, and they’re making her wait 90 days!

Can you imagine if a salesman made you come back the next day when you went asking to buy a car? This actually happened to me, by the way. My wife and I went to the dealership, said “We want to buy this car.” And the Salesperson told us “That’s great, but I’m leaving right now for our company Christmas party. Could you come back tomorrow? Here’s a brochure, go home and pick out the color you want and we’ll do it first thing tomorrow.” So we left and drove a few blocks down the street and bought a different car from a different dealership.

What does this have to do with your website? EVERYTHING. 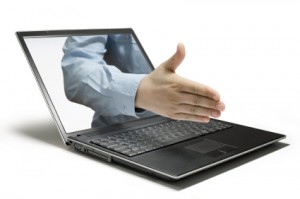 The IRS has a captive audience. They know you’re not going to buy from another vendor. They’re the only game in town, and those pesky laws make it even more convenient for them. But your company and your website don’t have that luxury (nor do I think you’d want it – look at the love the IRS gets!).

Your website is quite often your first point of contact with a potential buyer. And it doesn’t matter if your site isn’t an “E-Commerce” site. Even if you’re not selling a product you’re selling something: your image, reputation, a service, etc., or there’s no reason to go through the time and expense to build one. Don’t make it difficult for potential clients with a poor design, navigation scheme or too much visual clutter.

If you do have an E-Commerce site and you’re making people dig and hunt for what they want to buy, you are sending them to another site to use and purchase from. And yes, I said USE. Your site is a tool. Those who visit it are called users because they are there to use your site, get what they need and get on with their lives!

Sure, it’s great to keep people on your site. The numbers bear the fact that the longer visitors are on your site the more likely they are to buy. But, if they’re on your site a long time because it’s confusing or you’re making it hard for them to give you money, they won’t be buying. And they certainly won’t be spreading the word to their friends about what a great experience they had on your site.

So don’t be like the Government. Make it easy for people to give you money. If you need help in this regard, drop us a line here.