The Forecast Is Cloudy 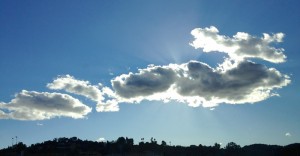 One of the biggest buzz words you been hearing for the past year or so is “The Cloud.” OK, so that’s technically two words. But what is it? And in case you were wondering, Steve Jobs didn’t invent it and neither did Al Gore.

The Cloud has been around as a concept as long as there have been servers (large powerful computers) connected to an Internet connection. The simplest definition of “The Cloud” is online storage. It’s when something is not stored on your own computer, but instead is stored on a server in some huge data center (with a million computers and a zillion other things being stored along with yours).

Your life WILL be different.

If you believe the pundits, you will have no storage on your computer at all within the next 10 years. You will have only a “terminal” which will be basically a monitor (or your wall-sized TV) along with some form of keyboard and mouse-like device where you will be directly connected to a bank of computers. You’ll turn on your connection device (something like a modem), you’ll login securely like you would at your online banking site and you’ll be able to access your documents and images just like it was on your own home computer. 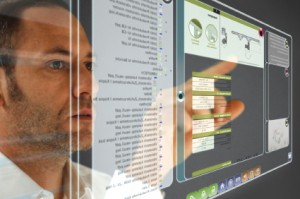 I think it will take longer than 10 years since there are still many millions of “regular” computer systems being used, and the Internet connections aren’t good enough in most places to really make it work but I think it could happen in a majority of places in the next 25 or 30 years. We already see it starting.

Apple was the first to really market the idea (no surprise there) with their iCloud, and their new products are gearing themselves toward the use of it. None of the new iMacs have a CD or DVD burner. I assume their rationale was “Why do you need to burn a CD? You can download music via iTunes and share files via iCloud.” You can still buy external burners but as annoyed as I was with the decision (I just bought one for my wife and she burns a lot of DVDs as part of her business), I was impressed by the long-term strategy.

Other companies are beginning to jump in as well. I am a “member” of the Adobe “Design Cloud”. For one monthly fee, I have access to as many of Adobe’s products as I want. I don’t have to keep buying new licenses for the many products I use on a regular basis (there are 4) and I can use any others that I’ve only wanted to use on occasion but couldn’t justify the cost of a whole license for it. They have a storage feature as well where you can save files, you guessed it, in “The Cloud.” And you can share them with others, etc. I think it’s a win-win situation because I always get the most current versions of the software and they get me paying more steadily than my every other year’s upgrade fee. I still have to download the software and instal it like always but it’s a start. Baby steps, baby steps.

I also believe that by the time 25-30 years comes around and we are all using terminals there will be other “futuristic” things to look forward to. I recall a scene in Star Trek IV where Scotty talked to the computer and then into the mouse not realizing that we had such arcane interface methods. Siri is helping and other devices I’ve been seeing will take us to whole new ways of interacting with our computers. Only they won’t be out computers. It will be The Cloud.