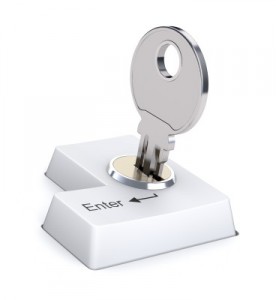 Well, mine isn't, but I know some people I thought were pretty smart who have used it. Yikes!

This is an edited version of an article I had tucked away in an earlier newsletter but I'm not sure how many people ever saw it, and I think it's really important so I wanted to put it front and center. It's about one of the most mundane and yet probably most important aspects of our increasingly digital lives: Passwords. Consider it like a Public Service Announcement – but
READ IT!

If you have a password that is less than 8 characters, it can be cracked almost instantly. No, I'm not being dramatic. It can be cracked almost instantly. This is a different situation than not opening email attachments from strangers to avoid a virus. A large part of your online security relies on other people in the security division at some other company. And you're hoping that those folks actually paid attention during their cyber security classes! But even if one of them didn't, you're at risk. And chances are good that someone was napping in class!

But there's no reason to panic. There is, however, every reason to be smart.

To help you be smart (and maybe sleep better), I suggest that you use crazy-strong passwords: 13 characters or more, and the more random the better! Each additional character adds difficulty – and security. It's like having another lock on your front door. A mix of upper and lowercase letters is also very good, especially if you're using some common words – which isn't so good. We also recommend changing your passwords at least every 6 months but more often for sensitive sites (banks and stuff)

If you have a password that is less than 8 characters, it can be cracked almost instantly.

And yes I know it's a pain in the butt – especially with all of the websites we have accounts with. The average is apparently 25 – but with only 6.5 passwords. I just did a quick count and I have 72 online accounts with passwords! The bottom line is that we need to stay ahead of the criminals who can set up (or buy for cheap) a powerful computer system that does nothing other than try and crack the code = our passwords.

Also, if you find out that a site you use has been attacked and possibly hacked (like LivingSocial, LinkedIn, GoDaddy, Yahoo and many others have been) you should absolutely change that site's login info – ASAP. You should also change any other sites that use that same username or password. Unfortunately, hackers know how lazy we are and if they successfully crack your login on one site, they and their hacker friends will try it on other sites too. That's at least one civilized aspect of their character – they share what they find. "Isn't that special."

I use this site to create annoyingly long and random passwords and a product called 1Password to keep track of them all. I use 15 character ones on every site that will allow it.

And if you're interested in why I recommend you take my advice above, you can Click here for a great and terrifying article that goes DEEP geek on how, with the increases in technology and hackers sharing information, these guys can break your passwords so much easier than ever.

So be safe.  Change your passwords.

And oh, yeah, let me know if you need some website help!  You can see some of our newest launched sites below.  :o)